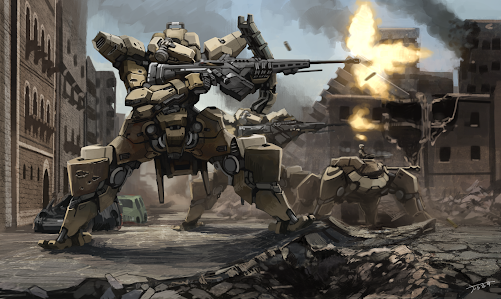 "Again, again, and again. It never ends. It's never satisfied. We're trapped, with no hope of escape. Not even death is a reprieve from this hell. This is our existence, this is what we're here for; it's sick, twisted amusement. Get comfortable; it's all you're ever going to know."
Metal Coffin is a far-future sci-fi dystopian hell, filled with dozen ton war machines, endless conflict, and inescapable misery. The 'coffin' as it's called is a gigantic space mega-station, built for the purpose of developing, testing, and manufacturing weapons for a war that is long over. Now, the station is abandoned, isolated in a silent universe that has made no contact with the station in incalculable years.
But despite this, the aging station has not ceased it's production, as the rampant AI continue their mission to design, test, and manufacture weapons of war, all in the pursuit of the perfect war machine, running endless simulations to gather ever more and more data, to improve forever and ever. After all; the war hasn't been called off, as far as the machines care.
The station itself is overseen by one head administrator AI, WARLORD. Few interact with WARLORD directly, though it's influence can always be felt, as though it delegates many tasks to lower level administrative AI, every major decision in the station is directed by WARLORD itself, all according to it's grand design. None know if WARLORD is rampant, or if it is working perfectly as designed- few care to know, as it matters little. The overseer AI is an unfeeling, unflinching machine of terror- and from a purely human perspective, is a sadistic monster that personally designed hell itself. 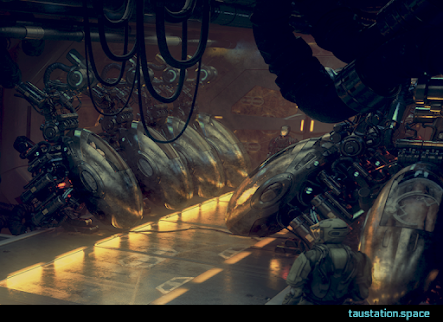 Trapped in this hell are the Replicants; biological human clones designed to upkeep and maintain the station when needed, able to meet unexpected problems with spontaneity and flexibility that simply is not possible with AI without risking total system failure. These clones are built from an extremely diverse biological databank, with a particular AI assigned to creating new stable strains and combinations, to continually replenish and reinvigorate the gene pool- after all, all replicants are sterile, and so new combinations and cloning vats must be constructed.
Born from single-body cloning vats, the replicants are injected with neurological patterns as they grow and develop, giving the replicants memories and experiences of entire lifetimes before ever exiting the vat; as well, replicants are spiked with a neuro-chip that reads all new experiences of a replicant over their conscious existence, and writes it to their continual memory database; thus, a replicant will retain knowledge and experience even after expiring- originally designed with the purpose of keeping training to a minimum, and offer greater ability to spontaneously respond to issues within the station. Now, all neuro-database does is keep the station's replicants locked in an eternal hell.

The Coffin as the mega-station is called, is a potentially ancient mega-structure built with the purpose of designing and manufacturing weapons. Countless years of isolation have taken a toll on the aging machinery, as much of the station is either faulty, damaged, or entirely non-functional. Much of the station has been cannibalized and recycled even- after all, there has been no shipment of supplies in much time, and thus materials for the station had to be sourced from less critical systems over time.
There are four primary sections of the station, though there are countless sub-sections across the vast structure of varied importance.

Factions of the Coffin

How to Run Metal Coffin

Metal Coffin is primarily designed for use with a tabletop game primarily for use with mecha combat; Lancer, Battletech, The Mecha Hack, etc. This is why I have refrained from mentioning specific pieces of equipment or mecha within this post, as I leave this up to the discretion of the DM to decide for themselves how to rule such things. However, for those who wish to play Metal Coffin with the framework of a more traditional fantasy game, such as B/X, I want to offer some guidance.

My prime idea for how to run Metal Coffin within the framework of B/X is simple; simply reskin equipment to be suitably sci-fi, and treat Monster stat blocks as mecha themselves. For a player to pilot a mecha, they must first defeat it in combat, and then salvage it- possibly with a gold cost involved- and then use that monster's statblock, with all abilities included therein, as their mech. All it truly takes is a re-imagining of fantasy magic and powers as the incredible weapons and tech the Coffin is capable of producing. I would perhaps personally limit the level of characters to 3rd, with any progression past this point requiring the characters to defeat and hijack more powerful mechs.

For magical classes, such as the Cleric and Wizard, you could choose to exclude such classes from play if you wish; or alternatively the DM can choose to reflavor the magical powers of such classes as inventions, weapons, and superior technology that the player is in possession of. A Turn Undead could be hijacking a Mech's computer systems, a Magic Missile could be an automatic-targeting missile launcher, etc.

It's been some time, hasn't it? Over a year I've been absent now. I apologize, my life has just been... Particularly demanding of my attention, so it's left me without a lot of desire to really work on this blog, and the projects therein. But that's changed. I've found a bit of stability in my life recently- and whilst I am not quite happy with the current state of things still, I DO desire to continue writing and creating. I don't have a lot of time for the hobbies I used to- I can't even get a single tabletop game scheduled- but I do have time to write, and write I shall.

So expect 2023 to be my year. A year of content, of new worlds to explore and imagine. I'm working on my biggest project yet; I plan to make multiple posts cataloguing the world of my home games, Edenis. This will be a massive undertaking, as it's the most detailed and fleshed out setting within my repertoire, and I want to do it right. But I'm excited about the possibility of being able to share it with you all.
So let's do it. I'll try my hardest to put out more interesting content in this year alone than I ever have before. I can't wait to see how it goes. And hey- If you wanna talk more about one of my posts, or anything else, shoot me a DM on discord. I'm always down to chat.