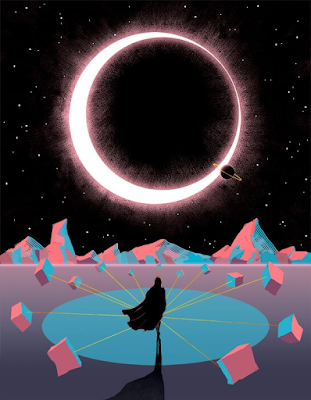 Long ago, civilization prospered, and bright-cities shone with infinite neon lights, blinding out the stars from the sky. We did not know why these cities shone so brilliantly, then; only that with their opulence, the natural beauty of the sky was erased. Like fools, we rebelled- and in the ashes of civilization long fallen, we now know why they shone so brightly.

Because the gods are watching, and we wished to make them blind. Nothing blinds them now.

Blind skies is a post-apocalyptic cyberpunk fantasy, hazardous not through the radioactive fallout of nuclear war- but because of vindictive alien gods that watch from above, affecting the world in strange, unpredictable ways. The sprawling cyberpunk cities of the old world are nothing more than ruins, save for one; and the land is filled with poorly understood, irreplicable technology and esoteric magical arts.
Blind skies is primarily inspired by Ultraviolet Grasslands, RIFTS, Caves of Qud, Death Stranding, and Hyperlight Drifter. Whilst I can't ever hope to capture even a fraction of the magic of those properties, I do hope I've made atleast something interesting here. The setting initially came out of a single prompt; "What if instead of nukes and radiation, it's elder gods and alien tech?" I then slapped on 'Cyberpunk cities existed to blind out the sky, to hide from the eldritch gods', and boom. Blind skies was born! 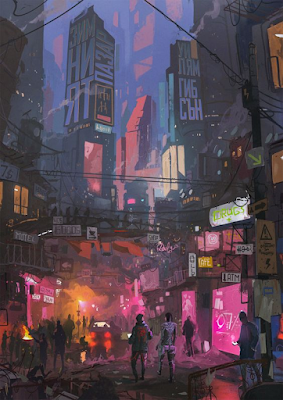 Whilst the civilizations of old have long since fallen to ruin, one city of the past remains lit; Pracht, the last bright-city. The last bastion against the horrors of the sky, Pracht is a maze of cold steel and glowing neon, impressive and sprawling, and yet... Ghostly. Where droves of hundreds or thousands once roamed the tightly packed streets, barely a fraction inhabits the city now. Further still, the light of Pracht dims, and the aging technology of the ancient city continues to fail by the day, causing it's inhabitants to steer clear of the dark, unlit sections of the city, for fear of the strange things that could happen in the dark gaze of the night gods.
Neon is the hot commodity of Pracht, and land within the ever-failing swathe of lights grows scarcer every year. The wealthy live comfortable lives, never having to fear what lies beyond the city lights, whilst the poor must contend with what lies just beyond sight; beds of crime and evil, with both violent gangs and mad cultists stalking the dark in equal measure. But despite the wide disparity between the two classes, Pracht is a city of opportunity; artifacts from the abandoned sectors are unearthed daily, and bring a fine mint to the adventurer daring enough to go into the darkness and find them. 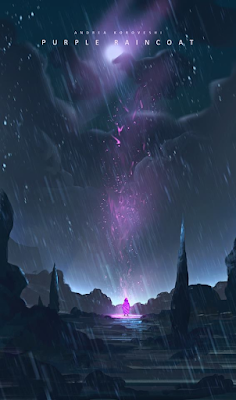 Outside of Pracht is a land shrouded in eternal night, the dark sky being lit only by the stars above, and the Iris; a ring of light that shines down on the world below, opening and closing in regular cycles that bathe the land in a soft purple glow. The land is dim even when the Iris is open, and is impossibly dark when it is closed- thus making the wilds completely vulnerable to the whims of the gods. Horrors crawl in the darkness of the Umbral Wastes, and the gaze of the gods twist and mutate all that their eyes fall upon.

Roving bands of gnollish barbarians, cyber-brigands, and horrific monsters are not only common in the Umbral Wastes, but to be expected; adventurers must contend with a myriad of hostile forces out in the field, and would best move with subtlety and care, lest they wish to be hounded endlessly by those who would seek them harm. Modest villages and rogue tribes can be found all across the wastes, though the majority focus on being hidden, to protect from harmful threats.

There are ruins of the old world aplenty to plunder, all across the Umbral Wastes; but to reach them, travelers must prepare for more than just violent adversaries to be an obstacle; the myriads of environments and weather patterns that can be found in the Umbral Wastes are extremely varied, along with the alien geography and other paranormal events the average adventurer will find treading the dark.
Random Anomalies and Encounters (d6):

The ruined world is characterized by a myriad of strange folk, most of which who have arisen due to the influence of the sky gods' warping gaze. Most people in the new world are mutated, in some way- unique, unlike anyone else. Others still are entirely alien, spawned from the darkness- and as unknowable as the dark gods that spawned them. 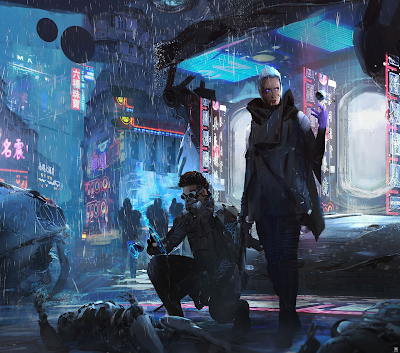 Blind Skies is characterized as a post-apocalyptic cyber-fantasy, and as such, most technology found in the ruined world is malfunctioning and poorly understood at best. Thinking machines are distrusted, and as such those who can understand the esoteric language of computers are rare. Data-Disks are common enough, containing broken pieces of information or programs from the old world, though terminals are rare, and those who can decipher the data without machines even rarer.

The technology of the old world, despite being used daily, cannot be replicated. Weaponry is valuable, as repairs are difficult; ammo is scarce and precious, so conventional means of violence are preferred. Bladed weapons and mechanized slugthrowers are the most common type of weaponry; laser rifles and beam swords are legendary and scarce, held by only the wealthiest of men, or the most daring of adventurer.

Vehicles are a valuable commodity, as parts can be difficult to replace, and fuel scarce; though vehicles are such a valuable asset in travel that they're usually well worth the cost. Simple motorbikes, reliable hoverspeeders, or formidable gravtanks; few things compare to the utility, mobility, and firepower of these ancient machines, though few know how to operate them.

Most famous however would be the cybernetic enhancements left behind by the old world; whilst poorly understood, replacing pieces of one's body with machinery is common enough, especially for the wealthy or social elite- as cybernetics tend to come with their own esoteric powers and capabilities that far exceed that of the common man. 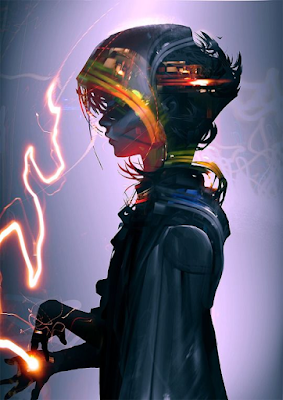 In the old world, ignorance was bliss, a safety; now, nothing is safe, as we understand now what they wished to forget. Insight is both a blessing and a curse, as it gives us power over that which we understand, yet threatens to destroy us for simply knowing it.

Terrible Secrets are ways in which you see the world differently, where the world itself has changed for you, and you alone; whether this is because you see the truth of the world, or merely because you are going mad, is impossible to tell. Every morning after a rest, roll the die associated with as many terrible secrets as you have; should you roll anything but a 1-3, you are wracked by the horrors of the world, and suffer the debilitating effect associated with that power for the day.

You can stave off the effects of terrible secrets for a number of hours, should you fail; narcotics are a favorite of the deranged for a reason. Clouding the mind is the only respite one can find against the terrible secrets.

Hidden Powers are the mental techniques that one gets in return for such terrible secrets, giving knowledge about the alien forces that harrow our world, and thus allowing us to wield them ourselves. Every time you use one of your Hidden Powers, roll the die associated with them; on a roll of 1-2, step down the die size. Should you roll a 1-2 when the die is a d4, the power is expended for the day.