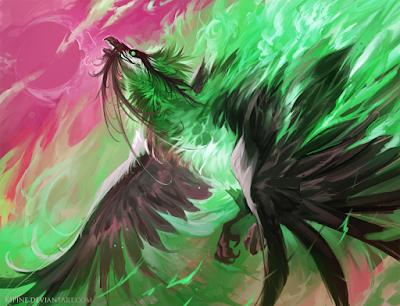 Ghoz Vahk
The fangs of the Great Eater lay bare, the rumblings of his pain resounding like thunder.
Few names strike as much fear and disgust into the hearts of men as Ghoz Vahk, the Great Eater. Depicted as a wicked cross between a white scaled dragon and a vulture adorned with feathers black as night, shrouded in a cloak of green flames; Ghoz Vahk is a terrifying visage. The god of a tribe of cannibalistic Lizardmen, the Great Eater has an insatiable hunger, demanding his followers to hunt and feast in order to satiate his ravenous lust.

Whilst a dark being, Ghoz Vahk has no evil intent; Ghoz Vahk merely wishes to alleviate his own unending suffering, and feel the hunger no more. Those who may meet or commune with Ghoz Vahk will find him jovial and easily amused, if absurdly impatient, tiring of distractions quickly unless satiated. Take care not to trifle with the Great Eater, or impede him from his feast- or you may find yourself his next meal.

Tennents
You are hungry, are you not? Give in to the feast, partake in the revel; suffer no more, there is plenty.

Whilst the core goals of those who align themselves to Ghoz Vahk are to hunt and kill and feast in service of satiating their dark god, the true pursuit of those who follow the Great Eater are to alleviate suffering through any method required, as voraciously as needed. With great zeal, those who follow the Horned Vulture are encouraged to seek the cure to their distress, no matter how destructive the pursuit. To revel in what makes them happiest, and in great excess, no matter the cost to those around them, is the way of the one who follows Ghoz Vahk. 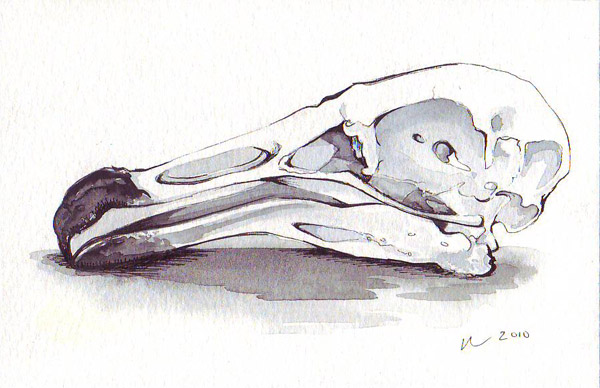 Holy Symbols
Heed these signs, for they signal something vast and terrible; a ravenous hunger, famished for bone and blood.


The skull of a vulture is the primary holy symbol to the priests of Ghoz Vahk, with the vulture being seen as an emmissary of their dark god, being scavengers who openly feast upon the carcasses of the dead. Fire is also of great significance to those who follow the Great Eater, as it consumes all around it in a nigh insatiable appetite, to the great destruction of all it touches. Flames that burn green are seen as a sign of Ghoz Vahk's influence, and are said to be a mark of his presence.

Priests
Fear not the god, for he will not harm you; it is his zealots that care little for you, only to appease their god.


Whilst wreathed in leathers and bone, wielding primitive weapons of bone and bronze, those who devote themselves with satiating the hunger of the Great Eater shall find themselves blessed with gifts of considerable might, as they are given tools with which to serve the needs of their great god. Given some control over evil magics, priests of Ghoz Vahk have some control over the green flames that their god breaths from his maw, capable of burning even through stone. Among their mastery of various curses and hexes, priests of Ghoz Vahk find themselves with the ability to consume nigh anything, able to chew through bone and rock with ease- even poisons pose little danger to them when ingested.

But even these powers pale to the greatest blessing given to these emissaries of death; the ability to devour magical power. Whilst requiring rest after frequent use, priests to the scaled vulture may consume magical energy in their presence; from eating an enchantment off of a lock, to biting a bolt of lightning out of the air; priests of Ghoz Vahk can gobble up nigh anything at all, so long as they get it in their jaws. As they eat spells in this manner however, the more appetizing the priest becomes, as they carry more and more latent magical power inside them- and so upon death, Ghoz Vahk himself will consume spell devourers, absorbing their might into himself. 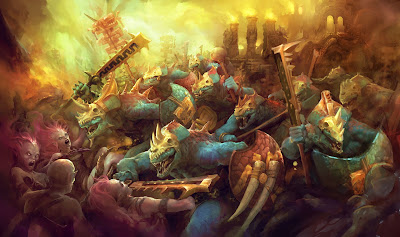 Take pride in the hunt, and rejoice to the great feasting, for our god is pleased with our bounty! Rejoice!

Those who follow Ghoz Vahk have many duties, with a fair amount of ceremony surrounding them all. The greatest task of the cultists of Ghoz Vahk is to satiate his ravenous appetite, and as such organize sacred hunts upon great and mighty beasts. Blessed by the priests, the hunters will go forth and slay the greatest beast they can find, with he who gave the killing blow being showered with praise, along with being allowed to claim the largest share of the beast for himself.

The great feasts of the Lizardmen are a thing of legend, with the followers of Ghoz Vahk being encouraged to revel and celebrate the slaying of a great beast. Such gatherings are seen as ceremonies held in honor of the Great Eater himself, as those attending engross themselves with the fresh kill as a sacrifice to their god, eating it in his stead.

When a great warrior or priest has been dishonored, it is customary he be killed and cannibalized, so that his might may strengthen and appease Ghoz Vahk, if even for a moment. Whilst a harsh punishment, such a death is seen as a great honor, and is held partaken with much respect. 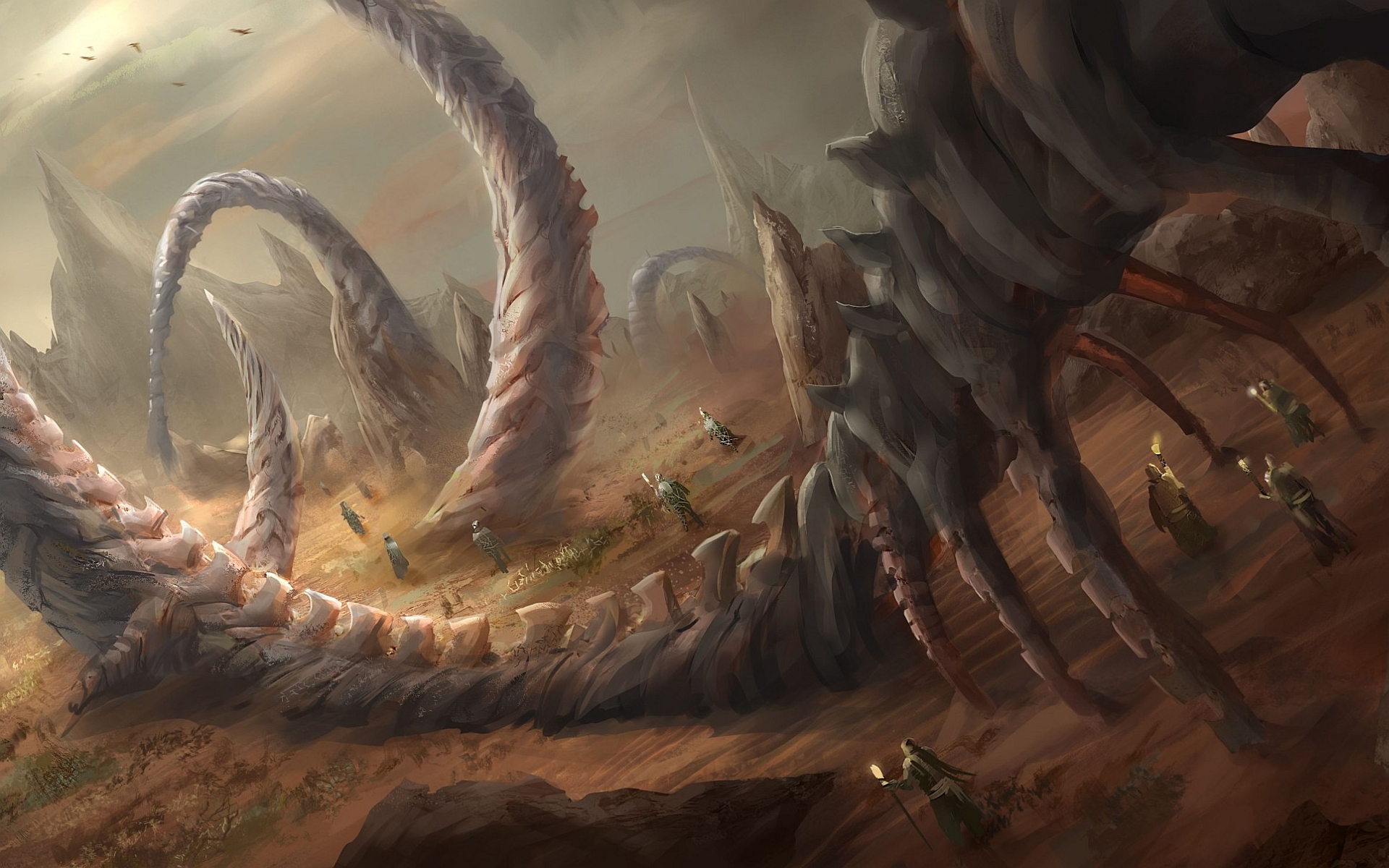 Afterlife
There is little time for rest! Hunt! Feast! Revel! For now and ever, for all eternity, by the grace of god.


Those who follow the scaled vulture and face death will find themselves taken to the realm of their god; a desolate wasteland filled with the bones of giant creatures, with great beasts with which to endlessly hunt and kill wandering the endless expanse, all for the amusement of Ghoz Vahk and his followers.

At the center of the plane is errected an immenesely large Ziggurat, with the top being the place with which Ghoz Vahk hosts an endless feast, a party incomparable to any other- with meat abundant, and other morsels aplently. When not lost in the wilderness killing, his followers gather to dine alongside their god, and renew their strength; only to go out and fight and kill once more after they rest, in an endless cycle.

Hey! Thank you for reading this. Ghoz Vahk is a god originating from a weekly AD&D game I've been attending for close to three years now, and has been perhaps one of the best tabletop experience of my life. Ghoz Vahk is very important to me, as he was once the character I played through a significant portion of that game, the Lizardman wizard Sneeze.
By the final battle of the campaign, after becoming a vampire, growing wings, and a boatload of other things, he ascended to Godhood, and became the megal ultra lizard dragon vulture we know him as now. He's perhaps my greatest achievement in any D&D game ever, so I just felt extremely compelled to share what he became; as setting agnostically as possible of course, so you yourself can hack and pluck him into your own game, of course!

If you've read to this point, thank you. I'll shut up about my dear precious god, now. Maybe I'll post the Priest of Ghoz Vahk class me and my DM built for him for use with AD&D sometime? Maybe I'll write up a B/X variant of it, idk. Thanks for reading, regardless!
on January 20, 2020